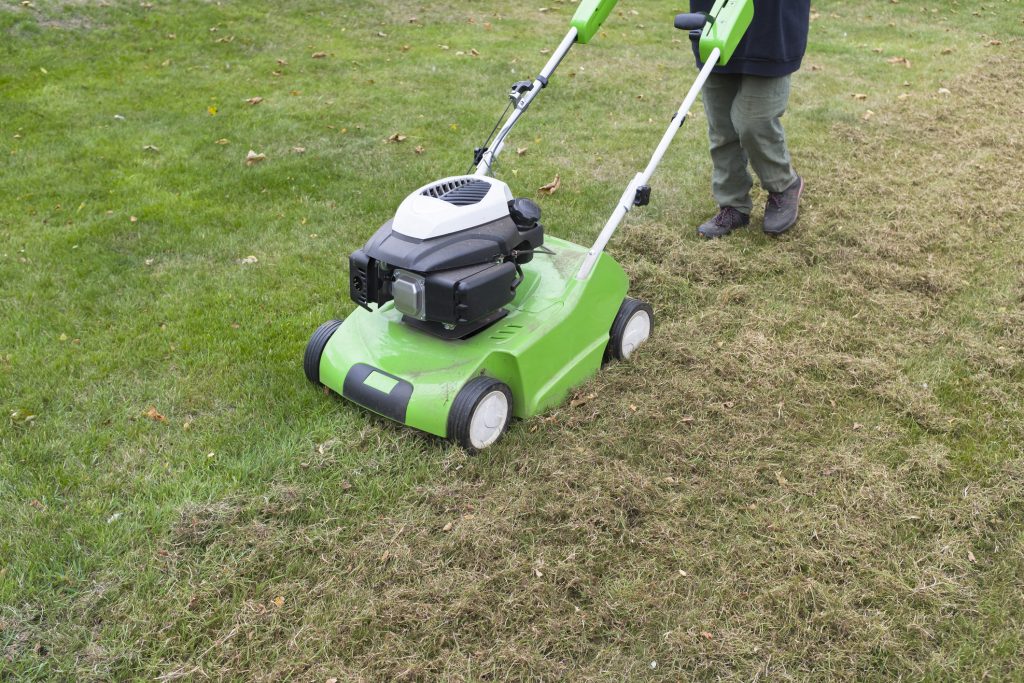 Scroll the internet and you’ll see the words ‘power raking’ and ‘dethatching’ often used interchangeably. However, there’s a difference. And what you do (or ask your landscaper to do) will impact your lawn in different ways.

Many homeowners and landscapers will say ‘dethatching’ when they really mean power raking. Dethatching uses a machine—a vertical mower—that’s also called a verticutter (pictured above). This machine has vertical blades in the front that turn and slice into the soil, pulling up what’s called ‘thatch’ and sometimes grass roots. These machines are great on lawns that have a very thick layer of thatch or need to be renovated.

Do not dethatch your lawn in the spring because it stresses the turf.  It can go through a long recovery period and struggle to rebound as we enter drier months.

One way to avoid having to dethatch is by aerating every fall. Aerating pokes holes into the layer of thatch, helping to loosen it up.

Thatch is a intermixed layer of dead and living roots, leaves and stems that accumulate between actively growing grass and the soil underneath. Thatch isn’t bad if it’s not too thick. A thin layer of thatch can actually increase how resilient your lawn is too heavy foot traffic. But if the thatch layer is too thick—1/2 to 3/4 inches deep—it can restrict the flow of air, water, and nutrients to the roots.

Because of this restriction, a lot of thatch can cause your turf to dry out faster. As the layer of thatch absorbs (and thus restricts) the movement of water and nutrients to root systems, grass roots itself within the thatch in an attempt to survive. Overall, thatch is a poor medium for turf growth, and if it dries out it’s difficult to rewet. If thatch does stay wet, it can harbor insects or funguses.

Power raking is completely different than dethatching. Many homeowners are most familiar with the process already when they place a heavy rake or tines on the back or front of their mower. This does a good job of lifting up dead grass and debris, but it’s not going to slice up your turf’s thatch layer like a verticutter. Incorrectly stated in the video below (but the process and machinery is correct), power raking is fine to do in the spring, and I recommend raking or standing up areas of your lawn that have become matted over the winter. Matted turf can rot and die.

Be clear with your landscaper

Often homeowners will sign on for dethatching when they really mean power raking. Typically, landscapers will power rake with their ride-on mower. But it’s important to clarify because they’re really two dissimilar processes that affect the lawn differently. You don’t want to make the mistake of dethatching your lawn in the spring when it should have been power raked instead.

When is the best time of year to seed? What about the the worst time? Here’s the answer from best to worst: